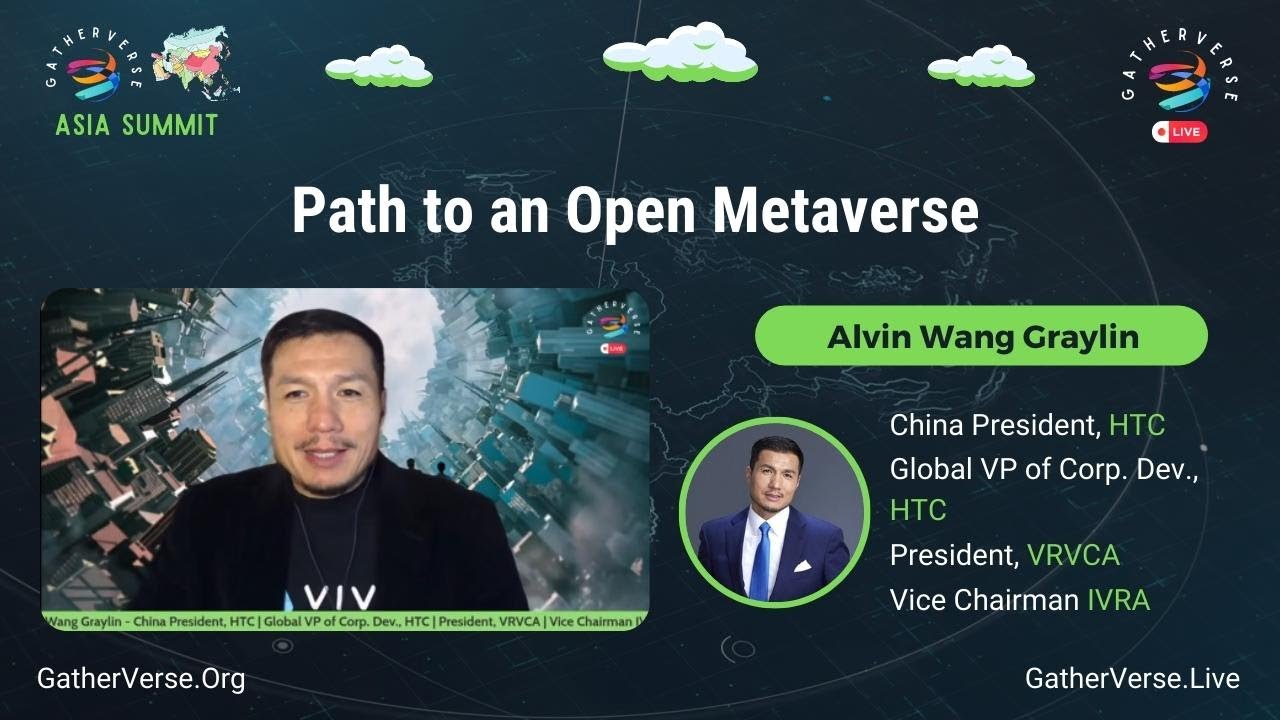 Kay Vasey: Enabling a Metaverse for People and Planet

Chitra Ananda: Taking interactive learning to the next level with 4D+ products

Wan Wei Soh – Metaverse in Asia: Trends in the Next 3 Years

Varun Sharma: Metaverse and the Democratization of Deep Tech

Bio:
Alvin Wang GRAYLIN has been the China President at HTC, leading all aspects of Vive/VR and Smartphone businesses since 2016 and this year just added the role of Global VP of Corporate Development, driving key partnership engagements for the company. He is also currently the Vice-Chairman of the Industry of Virtual Reality Alliance (IVRA) with 300+ company members, President of the $18B Virtual Reality Venture Capital Alliance (VRVCA) and oversees the Vive X VR Accelerators in Beijing, Shenzhen and Tel Aviv.ViveX is the most active investor in the XR space with over 110 investments in the space in the last 6 years.

Under his leadership, HTC has been voted as the top VR company in China at the World Conference of VR Industry (WCVRI) three of the last four years, and GRAYLIN has been recognized by media/industry experts as the most influential person in XR in China for the last 5 years. GRAYLIN first did his research in the VR space 30+ years ago under the tutelage of Prof.Tom Furness (The Godfather of VR). GRAYLIN is a sought after keynote speaker at major conferences around the world and appears regularly in major print/online/broadcast media.

GRAYLIN has over 28 years of business leadership experience in the tech industry, including 20 years in Greater China. Prior to HTC, he was a serial entrepreneur, having founded four venture-backed startups in the mobile and internet spaces, covering mobile social, AD tech, natural language search, and big data analytics. Additionally, GRAYLIN has held US$100+ million P&L roles at major corporations such as Intel, Trend Micro and WatchGuard Technologies.

GRAYLIN was born in China during the Cultural Revolution, educated in the US during the PC revolution, played a significant role to fuel the internet and mobile revolution, and now recognized as a top global thought leader for the coming Metaverse revolution. He received his MS in computer science specializing in AIfrom MIT and MS in Business from MIT’s Sloan School of Management. He graduated top of his department with a BS in electrical engineering from University of Washington, where he had specialized in VR, AI and CPU architecture. GRAYLIN is fluent in English, Mandarin and Cantonese.

~ GatherVerse – May our gather be well ~

GatherVerse – A Step Closer to The Metaverse

GatherVerse.Live – A Meeting Place of the Metaverse

Chitra Ananda: Taking interactive learning to the next level with 4D+ products

Kay Vasey: Enabling a Metaverse for People and Planet

Wan Wei Soh – Metaverse in Asia: Trends in the Next 3 Years

Varun Sharma: Metaverse and the Democratization of Deep Tech